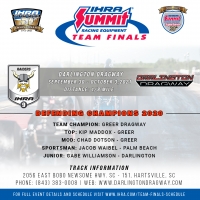 Participating tracks that will be in Hartsville, SC for the IHRA Division 9 (Raiders) Team Finals include:

Any Summit SuperSeries competitor, who has an IHRA membership and an “X” number registered (which was received prior to May 1) and valid according to IHRA records through his or her division’s Summit Team Finals event, can win the Summit Team Finals main event championship and become eligible for the Summit SuperSeries World Finals at Memphis International Raceway October 14-16.