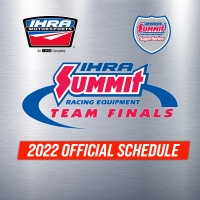 Some of the most popular and fun-filled racing events of the year, it’s an opportunity to experience great competition and even better camaraderie as part of your home track’s team.